Last night, my son and I played our second session of our Destiny RPG hack using a mix of Revised Stars Without Number, Godbound, and Other Dust.

I still have not found the time to type up our full rules, but those familiar with RSWN and Goundbound should be able to make sense of what we have so far, though how we are handling ammunition is a bit different.

Because Ammunition is an important part of gameplay in Destiny (it is what balances some of the heavier weapons against the weaker weapons) I am stealing an idea from Feng Shui and using dice to model ammo.

After a scene, you roll the Reload dice for every weapon you used and if you roll a 4 or higher, you are out of ammunition for that weapon. On any other result, you scale up your Reload dice by one step (a 1d4 becomes a 1d6, a 1d8 becomes a 1d10, etc...).

You also run out of ammunition on a roll of 1 on your attack roll.

You can carry "Reloads" with you and after each combat encounter you have a chance to have your Ghost transmute the dropped loot into Kinetic, Energy, or Power ammunition (the chance of each is set by the type of adversary).

We are using the "Ammunition" icons next to each weapon as a way of tracking the Reloads, placing a dice of different denominations on it (today, we picked up two sets of dice of the same colour to use for "Ammo Dice" in our next session...this was actually my son's suggestion, after he started using a token to track his Light. :) ).

You may notice that we also changed how burst damage works. As an alternative to the flat +2 damage you get against a single target, you can use the burst mode to do straight damage against Mobs (this did a nice job of simulating a badass Guardian blazing his way through a horde of 30 normal human/Awoken bandits, last night).

After two sessions of play, we are really happy with how the Sine Nomine games are simulating the Destiny setting (though I am abandoning my plan to use Barrowmaze as a setting, as the gritty megadungeon does not feel like a good fit for the superhuman run-and-gun feel of Desinty). The system feels light on its feet, playing quickly and responding to improvisation easily, but has enough tactical depth for the players to make interesting tactical decisions (my son loved his host of Light-related powers, particularly enjoying his Sunsinger Warlock's Firestorm).

Over the next week, I need to do work to flesh out more of the sandbox, which will necessitate some Destinypedia research, so I doubt I will be able to type up and post the full rules just yet, but it is on my "to-do" list, and I will continue to post stuff as it comes together.

Thanks to those in the community who responded to my last post about this, as well. Your feedback helped us shape the rules we used last night. :) 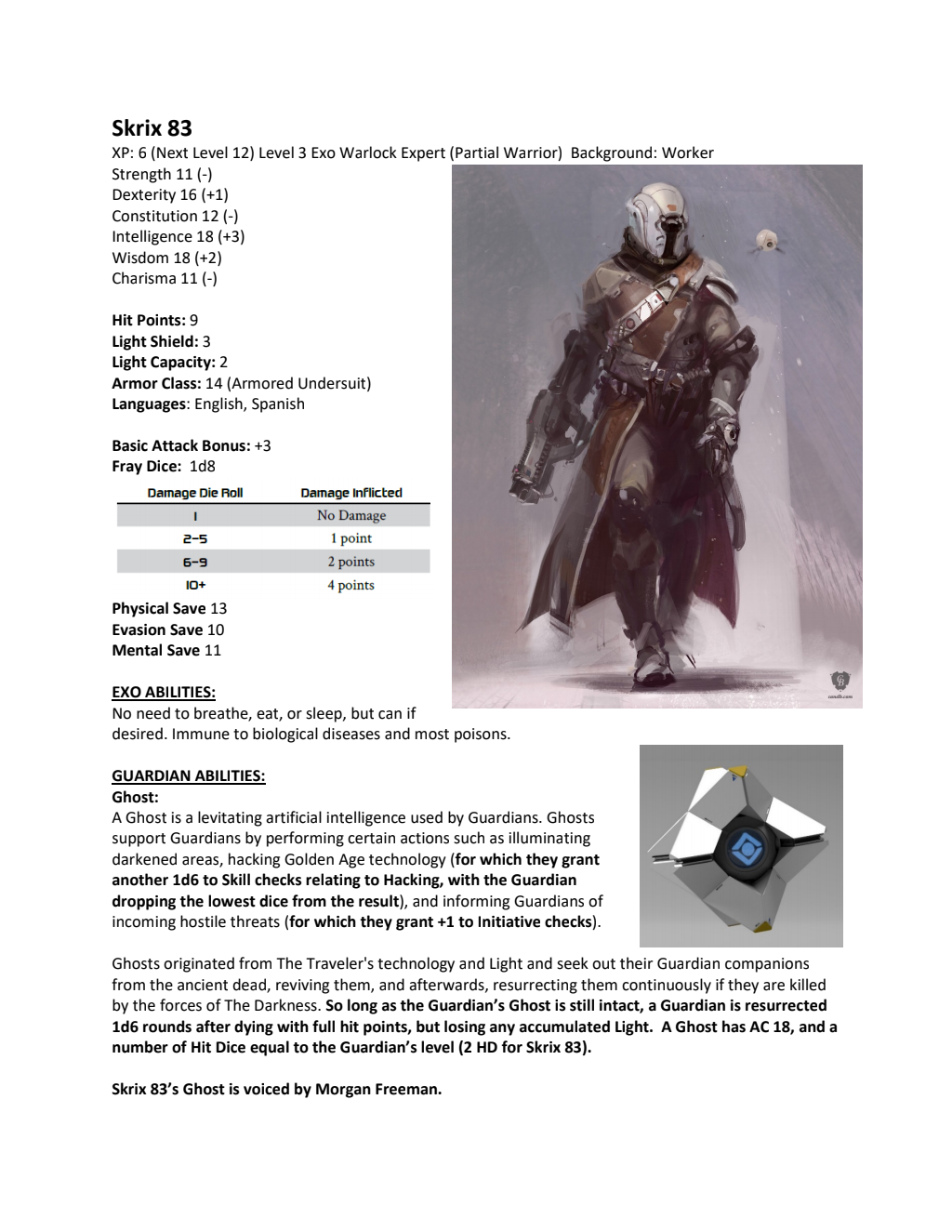 Oh, and my son is in charge of naming the weapons he finds, so blame him for any pun-infused weapon names. :)

Sounds like you are both having a great time!

This is really cool.