It's Lexicon of the Throne time, so here's a rough of the Word of Engineering, the intended replacement for Artifice in a modern or high-tech setting.

Being a God of Tech is at least somewhat well-contained when the highest normal tech in a world is a crossbow. When you're the God of Tech in a soft sci-fi setting where the boundaries are decidedly blurrier and more potent, however, things get sticky. I try to sidestep this with Engineering by limiting casual creations to the kind of tech the PCs could get on the market, whether legal or black. The 'Brilliant Invention' gift allows for situational super-tech, but you can only pick that situation once each day. For justifying serious campaign-shaking tech advances, 'Cutting Edge' covers how they work for campaigns with Godbound of Engineering.

My main goal here is to spare GMs from having to think about every single possible tech implementation the Godbound could conjure, and to spare the Godbound from wondering just how far they can push their 'I am a complete master of technology' shtick. 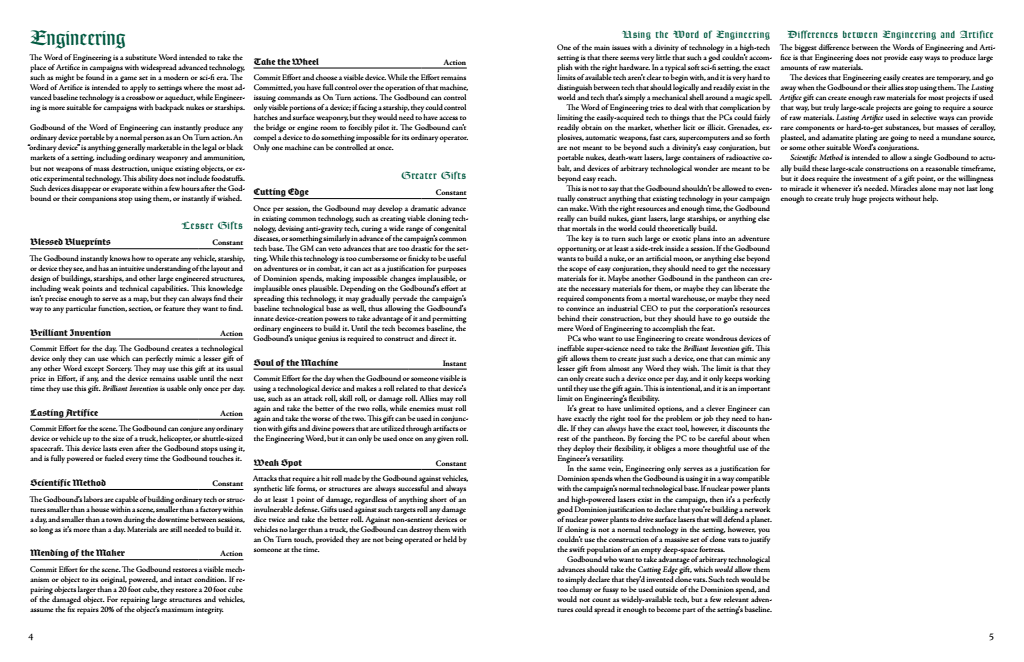 Wonderful. I love it!
Really, you could announce a game about roleplaying an ant colony, and I'd support the Kickstarter.

This is a stellar adaptation (pun intended) of the Artifice Word, and sets viable precedence to aid GMs in deciding on certain rulings.

Blessed Blueprint is a nice aid, allowing a GB to ignore rolling a techology-based roll to discern alien tech, or simply an unfamiliar vessel or piece of equipment.

Brilliant Invention is positively lovely, outright. It grants access to tons of utility gifts, including Builder of Mountain Peaks which can allow the Engineer-God to gather materials for their Scientific Method.

Lasting Artifice is quite nice; more for its secondary effect than it's primary; however, to me this gift seems like it might be... weaponized in an interesting and perhaps unintended way. Nothing quite says 'I don't like you' the way dropping fully fueled space shuttle on an enemy's hangar.

Scientific Method is quite nice (without being a total necessity, which has always been a guiding principle of KC's). It seems to me that this would also permit an Engineering GB to create pharmaceuticals, and functioning VIs, though that may have been intentional. I believe that a lot of time would be spent with this gift for the Engineer-God. I especially like the slick way it's worded.
Seeing the way the first sentence quantifies what can be made actually changes the way I felt about Artifice's intrinsic which I had never thought was lacking until having seen this.

Mending of the Maker is a stellar way for a GM to allow interesting contraptions to be salvaged by the GB/party at any time.

Take the Wheel is quite nice, and distinct from Command the Wheels in Artifice. Take the Wheel is somewhat of an improvement (even if only counting the hatch) as each directive does not utilize the GB's actions. Take the Wheel becomes really incredible, however, if the GB finds themselves facing enemy armored vehicle/ships as they can cause the entire machine to cease firing, or misfire at will... by my interpretation anyway. I'm not certain that was intended.

Cutting Edge is so good that I'd almost argue that it may be mandatory... or shy of mandatory. It discounts Dominion, sets a precedence for using the session as a marking of time, and does a lot of subtle things for the GM-player dynamic when it comes to the unfolding of the game setting (within the context of player-driven changes).

On the first point against SotM: the effort committed is for the day to force a reroll.

On the second point against SotM: this being an instant gift only works once.

On the first point for SotM: no saving throw is permitted Worthy foes.

On the second point for SotM: you may enhance a target's roll or alternatively negate a foe's.

It seems to me that in order to justify the Effort/day cost, the gift may simply foil the foe's attempt or ensure the success of an ally's attempt.

Weak Spot is very, very nice. I only wish that Hammerhand could be readily combined with it to allow rerolled (and better chosen) straight weapon damage to Made Gods.

This is a great Word, but more importantly an invaluable insight for adapting other portions of Godbound into a high-tech science-fiction style setting.

I will have to pass this along to the Artificier in my Scion-like game.

I can't wait for the kickstarter for that book :D.

The word is looking interesting, perhaps a little on the stronger side - very versatile.

The second page is also very useful - it's good to have some clear justifications for the powers and so on. I hope we'll get something like that for the upcoming words (and maybe the old ones in Godbound Revised if that ever happens ;) ).

There'll be no Kickstarter for the Lexicon- just a straight-up product appearing on DTRPG. I'm going to need all my Kickstarter energy for later in the year, when I hopefully get Wolves of God ready for launch.

Looking forward to Lexicon (and Wolves, after that).

Having insight into the Word design is really handy from a GMing and homebrew standpoint, and has applications beyond any single Word.

This Word looks flavorful and compelling overall. I'm sorry it wasn't around for my more modern-set Godbound game that I ran last year.

My main worry is that Brilliant Invention seems a bit too flexible. For a single Lesser Gift, it can pinch hit for literally any other Lesser Gift (obviating dozens of points of Word purchases). While I understand the limitations (an extra action and Effort required), it seems not enough to counterbalance.

On the flip side, Soul of the Machine looks like a situational Spun Fortune, and doesn't look like it will measure up as a Greater Gift.

I'm also concerned that Brilliant Invention may be too flexible, but the key limit to it is that you can only pick a gift to mimic once per day. That may or may not be enough- it's got serious potential as a downtime omnitool, so it may end up a greater gift.

Soul of the Machine is a little puny, even allowing that Luck is going to be better at die shenanigans than other Words. I'll probably make some tweaks to it or take it out in time.

+Kevin Crawford I think it might be quite nice if it were to simply grant an "Unerring Blade" style auto-success and a similar auto-fail to opponents with "Soul of the Machine."

Also, was "Take the Wheel" meant to work with "Creation's First Light," which allows you to see through non-magical barriers? If not, you may consider changing "only visible portions" to "only portions visible with unaided sight."

Thus s really awesome. I especially like how there are campaign ideas in many effects. I especially liked the note how with it Dominon reasons could be given but that they wouldn't change the rest of the world. The example of the cloning vats was brilliant.

I like the two added sections you have on the second page but if possible for something like the Word in Play still be present. The but of flavor text as a sidebar really helped me figure out some words.

I was wondering if you had plans to add new effects to already existing words?

Basically this supplement is gonna be bought as I love the concept.